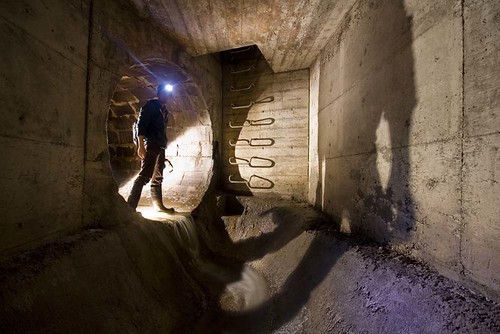 In the land of Etobicoke, there are two major creeks that guard the boundaries of the former city. Etobicoke Creek on the west and Mimico Creek on the east provided the built environment with two watersheds to service storm water and provide green landscapes like Centennial Park and West Dean Park.

What most people don't know is that there used to be a collection of smaller, less significant creeks along the shoreline that vanished during the process of urban development. When the built environment takes over these natural waterways, they never simply disappear, but need to be buried.

Creeks and streams exist because of things like changes in land grade, and even if the surface is paved with asphalt and concrete, rain water will still cause the ravines to flood.

Instead of having our streets pool with water everytime it rains, storm drains have replaced the creeks and streams by collecting rain water through a vast series of runoff pipes found in numbers on every road. To look at this process historically, I supposed you could say that bridges over a waterway were the first method of overcoming the imposing natural configuration. Over time these structures became more sophisticated and designs like culverts were implemented until it was decided that the speed of progress declared the water an inconvenience and was doomed to be buried.

Back to our story. Late last year, some drain colleagues of mine and myself thumbed through a newly released book, HTO (Coach House Press) that had an essay about the lost rivers of Etobicoke. This gave us some vital clues to where some larger pipes in South Etobicoke might be. My colleagues rifled through municipal documents and created retromaps of where these creeks might have once existed many years ago.

The first discovery along the eastern edge of Etobicoke wasn't much to brag about, but later on the other end, a pipe of both historical and aesthetic significance was found. The Colonel, named after a noble former land owner, is filled with different generations of drain construction.